Beer For The Weekend

Again I must apologize for being an absent blogger.
I want more readers so I'm trying harder to become more regular and dependable with my posts.
This weekend I managed to get Saturday off to attend the 11th Annual Mafiaoza's Music City Brewer's Fest.  Fifty breweries pouring 100 beers if the ads are accurate.
Jenny and I are going to the afternoon session.
I'm excited to be drinking beer on a Saturday instead of chasing car crashes and crime.  Plus, I hear a couple of old friends from Memphis might be there and I'm anxious to visit with them.
Today, though, I'm making a Steam beer.  I hit the mash a little high at 153 degrees but I don't think it will significantly change the character of the beer.
It's a pretty simple recipe.
Two row, C-40, Northern Brewer hops and, of course,  California Lager Yeast. 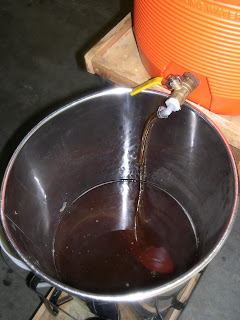 The new screen in the bottom of my cooler is allowing for a nice slow sparge.  It still stops running here and there but is easily started again.
I'm excited to have a supply of the beer added to my beer room.  This is one of those batches that I will savor over a number of months instead of drinking it on a regular basis like my Pale and IPA.
I'll not save it for years.  It won't celler well after 12 months or so, but I'll make it last.
This will ferment low at 62 or 63 degrees.  I hope the 7-day-old Ordinary Bitter I have in the fermentation vault is finished because it's about to get cooled. 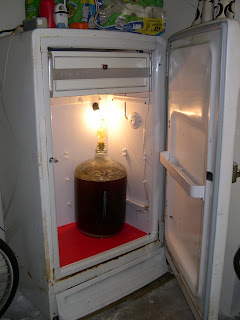 I'll let it sit for a few more days in the hope that the yeast will continue to clean up after itself.
Posted by Bluff City Brewer at 11:12 AM No comments: