The Summer of the Session Beer

First of all happy Father's Day to dad's everywhere.
I'll use my parental mission as an excuse for not posting anything during the last 5 months.
Apologies and, as always, I'll endeavor to become a real, regular, at least weekly blogger from now on.
On to beer.
I've been developing a couple of session beers during the last couple of months with some promising results.
I'm trying to have a full flavored Summer with a bit less alcohol so I went to my recipe archive and started with Best Bitter.
I make this beer well and I love it but I decided to trim it down to an Ordinary Bitter profile.  Specifically, I wanted the new gravity to be a 1.041 instead of a 1.054.
I applied the Best Bitter vision to my Ordinary Bitter recipe and the result was spectacular.
This beer tasted like a 6% beer but has a 4% footprint.  I thought it might be a fluke so I turned the yeast around and made it again.
Same result.
Since I have now emptied both kegs of it I started making it again last weekend with a second batch going into the fermenter today. 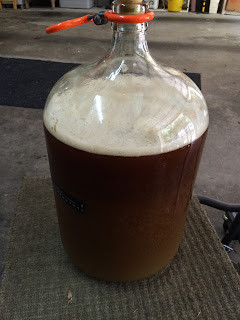 This is probably going to be the new table beer at our house.
In the meantime I started making session beers out of my American Pale and IPA.  I have tried to do this with my Pale in the past.  The results from a new approach are a step in the right direction.  But these beers need more work before they are ready to be served to anybody outside my house.
There are other beers to be made before Fall arrives so, lots to do.
Finally, my hops are not doing well this year.
What I first thought were hop cones appearing on the bines now just look like off-shooting growth. 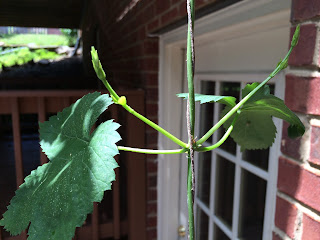 I guess you only get out what you put into it and I don't really study it much.
I'll look ahead to next year.
Good Beer To You.

Posted by Bluff City Brewer at 8:10 PM No comments: