Yesterday I made a new batch of American Pale 208, even though I still have about a case left from June.
I am nearly always able to make the same beer twice.  That is, most people would say that two versions of the pale taste the same.
But yesterday's measurements are almost exactly the same as those for the June 8th batch. 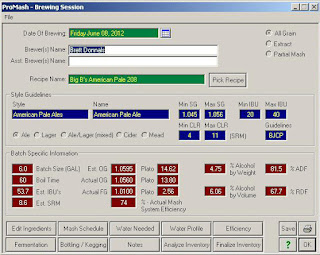 The final gravity won't be in for a week or so but I'm proud to have hit the mark for starting gravity, bitterness level, efficiency and color.
I even made sure the various bitterness levels calculated for each hop addition matched those from June.  That version of this beer is so good I want to duplicate it.
I know these numbers should be close anyway and that there are other factors affecting the finished beer like yeast health, pitching rates and fermentation temperatures but I'm excited anyway.  A bad sparge can really screw up the wort.
I chilled the beer to 65 degrees and pitched a liter of healthy yeast slurry I grew up the day before.
The fermentation looks good.  I set the vault to hold it at 68 degrees while the yeast does the rest of the work.
We'll see how the beers compare side by side in a month.
Good Beer To You
Posted by Bluff City Brewer at 9:30 PM No comments: