A Clone For The Keg

As I mentioned in my last post we vacationed at Disney for a couple of days last month.
I found a beer stand at Disney Springs selling Sierra Nevada Celebration.  As I walked and sipped that day I wondered why I've ever drank anything else.  Perhaps it was the right beer at the right time for just the right frame of mind.  Maybe I was influenced by the fact that I was having a beer on vacation, which always makes it better.  But in my home brewer arrogance, I resolved to try to make it.
I found an old recipe online and started adding ingredients to the recipe formulation portion of Promash, which I have used for 15 years.  After adding a handful of acidulated malt and subbing a couple of ounces of C60 to make up a shortfall of C40, I'm mashing the following: 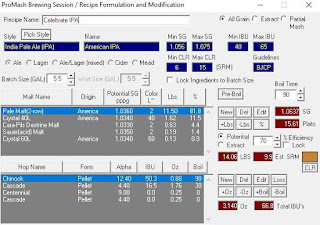 The mash looked good but the strike temperature came in short.  Really short.
I was shooting for 154 but hit it at 148 degrees.  The starting grav was long at 1.070 so this will be strong.
The lower mash temp might thin this beer out so I hope the Carapils Dextrine malt does it's job and keeps this one thick.
As I brewed I shot a little video and mashed it up with some I already had and added a bit of free music I found earlier on YouTube to commemorate the day.
My assistant was no help.  She just sat at the table as if she expected me to put a plate in front of her. 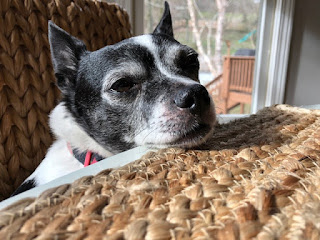 I'll evaluate the resulting beer in a few weeks.

Good Beer To You
Posted by Bluff City Brewer at 5:01 PM 2 comments: