I have planted these rhizomes for a few years now.  This is the first time they have began to sprout hop cones.  I don't know what I was previously doing wrong or what I might be doing right this time but here they are. 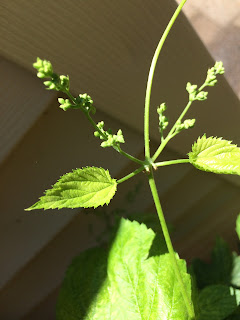 Without the acid content and cohumulone levels I won't brew with them.
They will most likely become potpourri in the fall.
New Session IPA is in the fermenter. 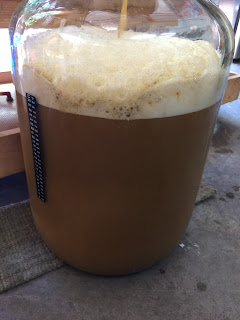 I made a few changes to try making this beer better.
Gravity looks good at 1.053.  That's just where I want it.
I think pushing it lower would make it tough to get a good balance.
And balance is needed, even in an IPA.

Good beer to you.
Posted by Bluff City Brewer at 9:28 PM No comments:

Working On "Son of Big Daddy"

Last Fall I began to re-work my IPA recipe.
The one I used to make wasn't very satisfying.
After a couple of attempts I came up with a pretty decent beer I called Big Daddy.
But then I started re-imagining the beer as a session beer along with my Pale.
I just finished drinking a keg of my first attempt last week.
The beer was drinkable but lacked the malt backbone an IPA needs to keep from being bland hop tea.   It was too bitter, even for something I'd call an IPA.
I think I pushed it a little too thin for the style.
Based on my judgement of that beer (and a quick inventory of the grains and hops I have on hand right now) I made a few changes to the recipe. 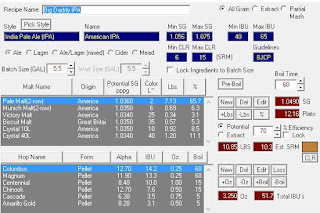 The first try might have been a bit of a stretch but I think I'm closing in on a good balance with the one I'm making next weekend. 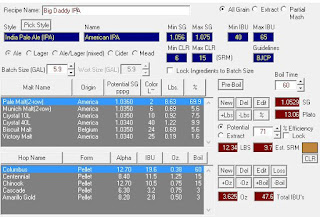 I am making short steps here.  Backing off the bitterness a bit and bolstering the gravity a few points with a bit more 2-row.  I eased up a couple of minutes on the aroma hop addition too.  This might help take the sharp edge off this beer.
Brew, ferment, package, judge.
The process is slow but rewarding.
We'll hope for the best.
If this beer is a winner I'll start brewing it regularly.  'Son of Big Daddy' is cheaper to make and lots more approachable than a big alcohol IPA.
In other news, I have lots of clean bottles lying around but only one beer (Independence Amber) to be packaged in the next week or so. 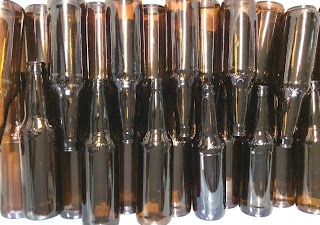 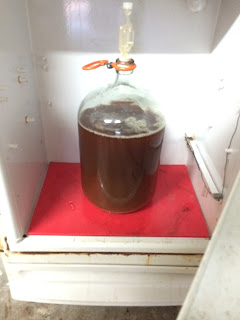 My beer room is getting a bit lean.

Good Beer To You.


Posted by Bluff City Brewer at 5:52 PM No comments: 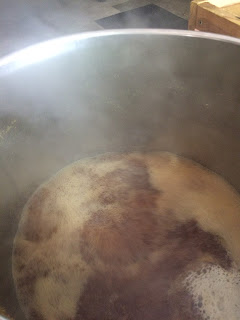 Okay, I made this beer yesterday.  But I'm counting it as a 4th of July beer since it was made just one day off and it was as hot as a firecracker out in the brewery.
This beer is made with US grains, US hops, California Ale yeast and Nashville water so it's about as American as it gets.
The final gravity was a bit long at 1.069 so this beer will be a shade less bitter than previous versions.  I usually shoot for a bitterness ratio of about .88 or so but this one will come in at .81.  That's still a bit high for the style but I enjoy this ale with a "west coast" groove.  This batch will be for the bottle.
The Ordinary Bitter has been kegged and sits in the fridge conditioning.  Ten gallons will be enough to take us on into the beginning of September.  By then I will have taken another shot at my session-ized American Pale.
I re-joined the Brewers Association as Trace Brewing and returned to working on my business plan for a small local brewery and taproom in Bellevue.  I am undaunted by the current slowdown in growth of craft brands for this year.  The current growth rate for craft beer would still be considered phenomenal in most other industries.  But I will be watching it closely toward the end of this year and on into 2017.
The industry is changing.   Giants like AB/Inbev and SAB/Miller are buying craft and making craft looking brands, obscuring what used to be a stark contrast between the two.  While this is more prevalent than ever it's hardly new.  Blue Moon and Shock Top are among many big brew brands that have been on store shelves for many years with minimal acknowledgement on the label about who really makes them.
But I worry, as many do, about the distribution control big beer might wield with the acquisition of these brands.  That might make it more difficult for a start-up like me to get tap space in a market with several great locally made brands.
I'll just keep putting one foot in front of the other, however slowly.
My mission statement focuses more on how beer can serve and improve the local community than on becoming a peer to Sierra Nevada or Sam Adams.
I still have some work to do before I launch a campaign for funding.

Happy 4th of July.
Good Beer To You
Posted by Bluff City Brewer at 2:08 PM No comments: