Last week I started to make a Brown and got a stuck sparge.  The wort stopped about a quarter of the way through.  I had to transfer it to a couple of buckets while I cleared the not so obvious obstruction.  I put the wort back to the tun and the same thing happened again, 3 times.
This phenomena has happened before but not nearly as much.
I think that my old plastic false bottom, that I have used for 7 years, is softening under the heat and weight of the mash and pushes the opening against the bottom of the mash tun. 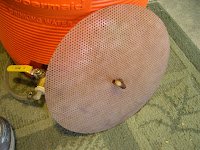 I suspected the tube connecting to the spigot as well so I replaced them both.
The new screen is stainless and, I presume, will not fail.  The new tubing is heat resistant silicone. 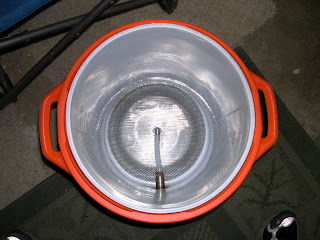 As I sparge this American Brown the thing has now stopped twice making me think that there is more to do.  A small adjustment to the valve has fixed the problem both times so I think there might be some grain getting caught in the flow out to the kettle. 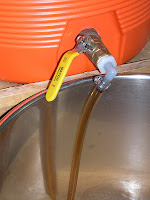 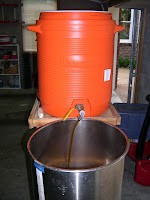 I will monitor the performance of the new stuff carefully.
Peace, love, beer.

Posted by Bluff City Brewer at 9:23 AM No comments:

Fresh IPA On The Way

Tomorrow I have to rack the Pale I made last week into a smaller fermenter and dry hop it so that I can get a batch of IPA going.
I'm really into this IPA right now. 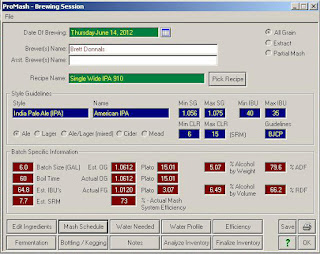 I have been drinking it all year and I'm still trying to get the water just right.  I think a little gypsum might accentuate the bitterness just enough to make it more... well, IPA-ish.
Whatever I decide, I'm trying to perfect the process for this beer so I'll keep good  notes on tomorrow's session in ProMash.
Cheers
Posted by Bluff City Brewer at 9:36 PM No comments:

The starter I made yesterday was still bubbling well when I put it on the wort this afternoon.
This brew went pretty well with only a minor issue of sparging too much and getting slightly more of a slightly smaller beer.
My assistant brewer took the day off. 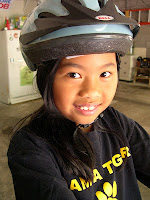 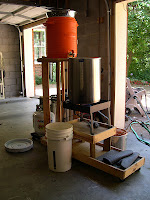 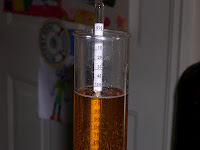 I was only about 3 points off the gravity I expected.  1.056 is still a nice reading for a drinkable, non-session american pale.

The first hops went in after I had stirred the pot a bit giving it the look of a giant cup of hot chocolate.  The boil started soon after. 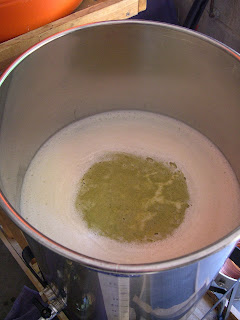 I like this beer.  Its probably my favorite.  I've made it many times and it has recieved a few medals. 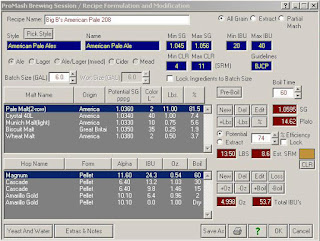 Some might say the grist for this beer is a bit 'muddy' with 5 grains but it took a long time to get it just the way I like it.  I have always believed the biscuit malt brings in a hint of breadyness (if that's really a word) without being overbearing.
And you can't go wrong with Cascade and Amarillo hops.  The Amarillo can be tough to get but the Cascade carries the beer anyway.
I matched the IBUs for each addition to a previous version of this beer that got a 44.5 at competition two years ago. 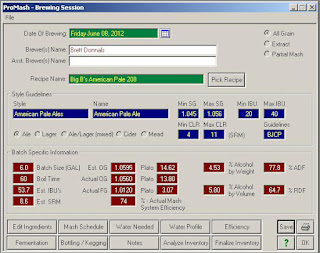 The total bitterness is on the high side for an American Pale but I think it matches the gravity pretty well. 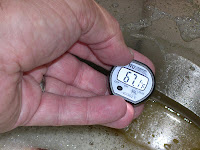 I chilled the wort a bit lower than the 68 degrees I try to get to in cooler seasons to minimize heat picked up during the transfer to the fermenter.   I mean if the garage is 80 degrees the beer is going to get a little warmer as it falls from the boil pot into the carboy. 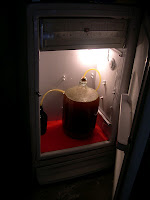 I put the beer into the vault and set the temperature controller to 65.  It won't ferment that low since the yeast will create some heat as it eats the wort and expells good tasting beer.  But I have learned that during the first 48 hours of a vigorous fermentation the fridge needs to work a bit to keep the beer at the proper fermentation temperature.

I have high hopes for this beer.
I go through it so fast.
I'll need to start thinking about making it again about 2 weeks after its ready to drink.
There is an IPA and an American Brown to be made in the meantime.
Good beer to you.
Posted by Bluff City Brewer at 6:17 PM No comments:

I'm down to one bottle of American Pale 208 so I've decided to make some tomorrow morning.  I was at the brew shop earlier, getting the grist for this beer and an IPA, unsure about wether spend money on fresh yeast.  I am pretty confident of the California Ale yeast I harvested a few weeks ago so I decided to get some dry malt and grow up two good samples tonight while I sleep. 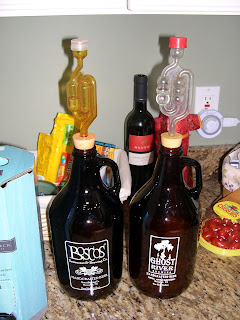 I boiled up a half pound of dry malt, chilled it and split it, and the harvested 1056, into a couple of sanitized growlers.  This way I'll be able to make beer tomorrow and then on Saturday before I go to work.
I don't really need to have more beer over here but I think making beer relieves more of the stress from my job than drinking it does.

Naah... drinking it is very relaxing.