Once again, to my delight, Fall is here.
Cool air blowing leaves about always improves my demeanor.
But so does a well made beer.
I know that Marzen is supposed to be made in March and drank in October but I didn't get to it in the Spring and it's difficult to chill the wort to pitching temperature in the Summer.
It looks good. 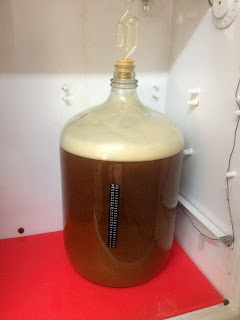 I was a bit worried about the ferm though.  I made a starter from some saved wort and a vial of German Lager yeast but I didn't get to make the beer for four days after.  I chilled the wort to 52 degrees and pitched the starter, which had been waiting at that temperature.
It appears to be fermenting as vigorously as a lager can at 53 degrees.
I think this will be a great beer.
Much of it will go to my next door neighbor, Eric.  He needs to know that I have not forgotten our friendship and who helped me put brakes on my wife's old car.

Also, a new brewery has opened here in Nashville.
Tennessee Brew Works has been up for about 6 weeks now with their taproom now open at 809 Ewing Avenue.
I was shooting a story at the 2nd annual Tennessee Beer Festival in Donelson a couple of weeks ago and met founder Christian Spears.
He and his crew had 3 beers there.
Basil Ryeman is a spicy, fruity farmhouse ale that includes Basil.  My wife would probably like it a lot.
There was Extra Easy, an English pale and an IPA called Cutaway.
Since I was working I was unable to try any of them but the steady crowd hanging around their booth assured me that all were good.
I enjoyed talking with Christian, who offered advice and encouragement to my brewery project.
I am grateful for someone who is willing to help me find answers to the questions my business plan has created.
I'm pressing on in spite of the challenges but invigorated by them as well.

Beers on the horizon include my own ESB, a Pale and an American Amber to replenish my empty beer cellar.
Good Beer To You.
Posted by Bluff City Brewer at 11:22 AM No comments: