It's October. Where's The Maerzen?

Yes, I know this beer is normally made in March and lagered until it is ready to be consumed in the Fall but I like to make it around the time it gets cool enough here to ferment ales in the basement leaving the fermentation vault in the garage available for the month it takes to finish a lager like this one.  There are other beers to be made in the interim.  Bitters, Alts, probably another Amber and an IPA.  Maybe even a Rye IPA.
Anyway here it is. 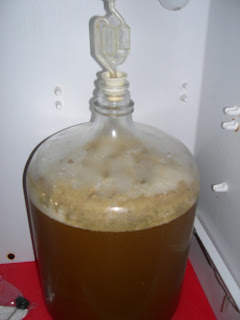 Good krausen on top despite the vault holding the temperature to around 51 degrees.
I had made a starter from a fresh pack of Bavarian Lager yeast a couple of weeks ago.  It started a little slow and I didn't get to brew anyway so I held it for a week and stepped it up a few days before I pitched it on Saturday.  I didn't forget to crash it to about 53 degrees before I poured it into the wort, which I chilled accordingly. 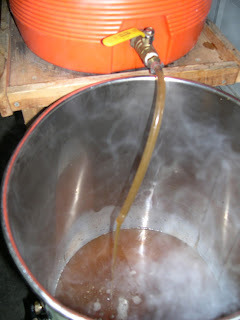 I did a decoction for this beer.  That is, I mashed the wort at about 122 degrees for about 30 minutes and brought a portion of it to a boil before I put it back in the mash tun to bring the mash to a rest temperature of 155. 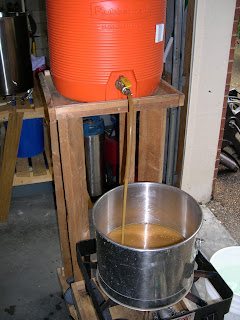 This is an old technique that has been used historically with malts that might need a bit of help converting their starches to sugars.
The malts I'm using probably don't need the benefits of this step, but, you know, it's a bit of a lost art and I believe that making great beer is a creative act, so I did it anyway.
If this beer is competition worthy I'll enter it and, of course, post the result.
Until then.  Good Beer To You.


Posted by Bluff City Brewer at 8:40 PM No comments:

First, the Pale that fell on the floor tastes fantastic.
One of my best versions of it.  Just in time for a couple of competitions coming up.
Since then I've made a Blonde, a Stout and a Brown.
Today I'd like to make an Oktoberfest.
But the Bavarian Starter I made last night is not as active as I'd prefer. 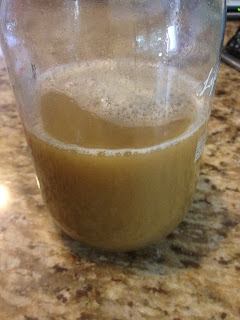 I'm sure this will eventually get going but if I'm going to make beer during the next two weeks I need to make it today.
It's early in the day so I'm going to wait til this afternoon to hopefully see more bubbles in this airlock. 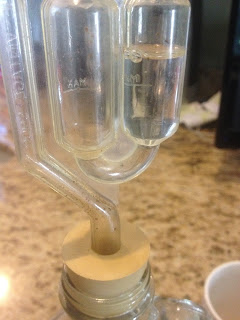 If not, I'm unwilling to risk the grain and hops.
Good Beer To You


Posted by Bluff City Brewer at 9:41 AM No comments: