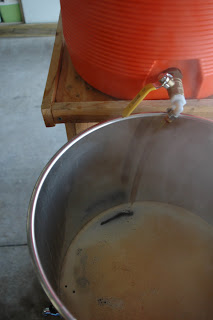 After six months of work I finally finished brewing the last beer for competition today. An English Pale. The unavailability of certain malts and yeast changed the recipe but the session went well. I was 3 points heavy on the target gravity but efficiency was good.

My assistant brewer was not helpful.
Yesterday's Weissbeir is fermenting away in the fridge despite being set at 63. 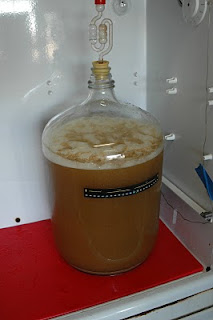 I'm trying to follow a rule I learned from Ray Daniels' book. The sum of the yeast pitching temperature and the fermentation temperature should total 30 degrees centigrade. I could only get the wort chilled to 56 degrees F and the yeast specs say 64 is good for this strain so I'm a little long at 31 or 32C. It looks very active in the carboy. I've never really come up with a fantastic Hefe so I have high hopes.

I'll bottle the American Stout this Saturday and package the two I made this week on the 30th.

That's a total of 11 beers to enter into Homebrew Extravaganza 2010.
I want to win a few this year but we have several talented brewers in the club. The competition is going to be tough. I'm more interested in the score sheets.
My wife is pleased that I'll be concentrating on painting the bathroom and the office/playroom for the next couple of months. 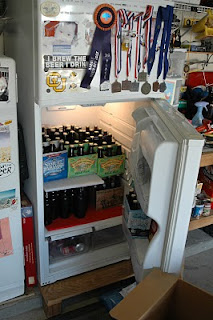 Of course, there will be plenty of beer to help the projects along.
Posted by Bluff City Brewer at 8:51 PM