Hops and a double batch of Pale 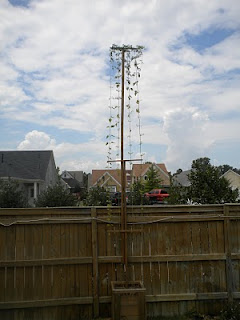 The hop experiment is apparently not going to be a success this year either, for a different reason. Maybe its the birds nesting on the trellis. Or maybe being away and not watering them during our 9 day vacation from the Memphis heat was too much for these thirsty plants.

Who knows. But the results are yellow, dry leaves that are falling on the ground and a very slow growth. Its not really a big deal since I'm not going to use these hops for any substantial addition to a beer but I would like the plant to be an attractive part of the yard.

I'm puzzled by the double batch of Pale I made yesterday. This is my table beer, a session strength ale I keep for everyday consumption. The brew went fairly well with the exception of a stuck sparge. I didn't want to transfer the beer out of the mash tun so I kept cleaning the outflow tube by forcing air back into the mash from the bottom. That was a bad experience, but the extra slow sparge did help me exceed my target gravity by 5 points, coming in at 1.046. Good thing I decided on a couple of more grams of hops at the last minute.
I had made a large yeast starter the day before, planning to split it between two carboys after I'd filled them with wort.
The 6 gallon carboy got the better part of the beer and the 6.5 gallon got the rest, about 10.5 gallons total, near as I can tell. I swirled the yeast around the jug and pitched into the wort accordingly.
Same wort. Same boil. Same yeast.
So why do they appear so different? 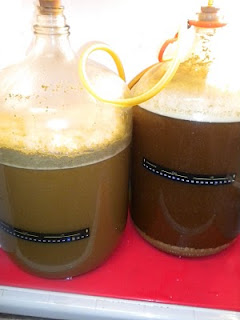 I do know that there was lots of break material in the second half of the transfer (on the left) so that might be it. And maybe there was trub of some sort in the starter I made from last week's American IPA.
It'll be interesting to see of there is noticeable difference in taste or appearance in the finished beer. 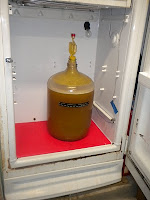 The Hefeweizen I made 10 days ago has been brought into the house to warm up and finish fermenting before being bottled tomorrow.

Finally, I've volunteered to chair the competition committee for Homebrew Extravaganza 2011 so there will be either (a) lots of posting about that in the coming months or (b) not much posting at all.
Peace. Love. Beer.
Posted by Bluff City Brewer at 9:03 PM