Bottling day isn't usually something a homebrewer looks forward to.  My brown ale could have benefited from another day or two in the fermenter, but I needed the yeast for an American Pale I was to make the following day and I decided 7 days (instead of 10) to finish this beer would be just fine.
With our family in the middle of a move to Nashville, Jennifer is not home part of the week and I have to be a single dad.
Getting the job done and spending time with my daughter meant that I would have to employ a helper.
Hallie did a great job.  After I filled the bottles she carefully placed a clean cap on each so that I could crown them with my capper. 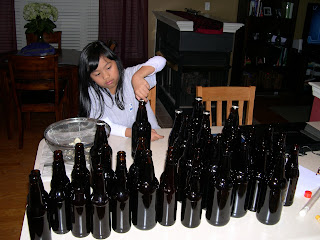 This will be a good beer.  Malty and bready with a strong hop flavor.
Too bad Hallie won't be able to try any of it for about 14 years.
Anyway she says "beer is not for girls."
Posted by Bluff City Brewer at 1:58 PM