I sent a few beers to Memphis for Homebrew Extravaganza 2013 and was surprised to win a few awards with old beer.
You can check out the full list of winners here but I managed to get a silver medal for an American Stout I made 15 months ago, a gold for a Blonde Ale I made last March and a Gold for an American Pale I made in August.
I'm not so surprised at the Pale.  I've made that beer with both Memphis and Nashville water and it has won lots of medals.
The Blonde I didn't expect to do much, though.  These lighter ales do not usually hold up for more than 6 months or so.
The Stout was a real surprise.  I don't drink these beers that much so a batch lasts quite a while.  I had some of it left and sent it to have more entries in the competition.
I did have high hopes for some other beers that didn't do anything.  American Amber, Oktoberfest, Ordinary Bitter.  I thought these would get some attention.  And they might have scored well but got out scored by other beers.  Every year there are more great brewers out there, so I'm not surprised.  I'll wait to get the score sheets to see how they were judged.

In other news, my Blonde and Pale were well received at the Mardi Gras school fundraiser, held at The Cathedral of the Immaculate Conception, our former parish in Memphis.  Our friend Vince Higgins was one of the primary organizers and says the beer went over well.

Finally, in an effort to replenish my beer room I've brewed four Thursdays in a row. 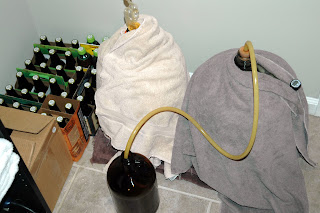 The thing is, I don't have lots of carboys laying around and I really like a 14 day fermentation cycle.  So for 2 weeks straight I've had to bottle a beer just to free up my six gallon tank, then rack over the beer from my 6.5 gallon tank, harvest the yeast and clean the 6.5 so I had someplace to put the beer I was making that day.

These were pretty busy brew days but what I'm really trying to do is take advantage of the basement bathroom temperature.  Right now it hovers around 66 and will keep an active fermentation in the 68-70 range. 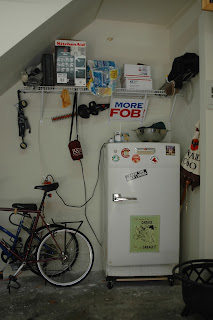 I would use the temp controlled vault in the garage, but I want to do a Dopplebock in there for about a month.  I'll use the vault when it warms up.