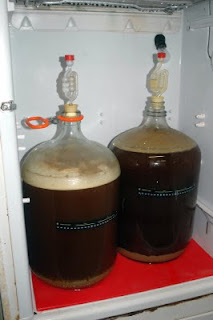 I made a Winter Bock on Friday and everything went well with the exception of a couple of small changes to the recipe. The last time I made this beer I used 1 ounce of bitter orange peel, some cinnamon and some fresh grated ginger.
I entered it in competition in two categories, Bock (because it is the underlying style) and Winter Spice. The beer placed in Bock and got nothing as a Spice beer.
I saved money this time by using some free home harvested orange peel (not bitter orange peel) and a teaspoon of grated ginger from our spice rack (also already paid for) along with the cinnamon. I expected maybe a little spice in the un-fermented wort this time but when I took a whiff of the flow going into the carboy it smelled like a fruitcake. Also, I used a new Wyeast strain called Hellebock.
We'll see what happens.
The Oktoberfest I made 28 days ago is going to be bottled today, I hope. The family went to a

birthday party for a couple of hours and I need that time to do it without interruption. And finally, I sampled the session strength American Pale I made a few weeks ago. The first cup came out overly bitter. I think this is because there were some hop bits in the bottom of the keg that did not get strained when I packeged the beer. I have experienced this phenomena before and I believe the beer will become clear and smooth by the time I pour the 3rd or 4th cup. The body is a bit thin but the taste is good otherwise. I might raise the mash temperature next time or add a 1/2 pound of Dextrine malt to give it more body.
Posted by Bluff City Brewer at 12:59 PM