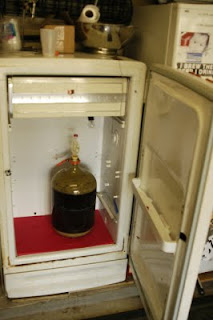 Today marks the first time I have ever simultaneously fermented 3 beers in our house. They are all at different stages but until I can move one to the closet in the bathroom and package another there will be an aesthetic problem at our place.
I've got the Winter Bock from the 13th going in the fermentation vault at 51 degrees so I can't put an ale in there with it.
The only place that's 68 to 70 degrees right now is the guest bathroom off the kitchen. With today's pale brew it's getting crowded in there. 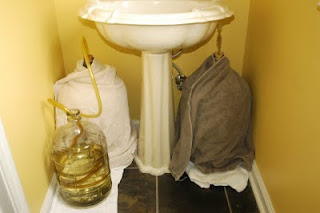 I'm in the middle of a big push to make 9 or ten beers for Home Brew Extravaganza 2010, our local competition held here in Memphis in February.
I've already made a Steam Beer and an Oktoberfest. I need to package the Bock and the American IPA. The American Pale will be ready in two weeks. I hope to make an American Amber, an American Brown, an American Stout, an Ordinary Bitter and a Hefe by the time the beers are due. I'm not sure I'll be able to do it but it'll be fun to try. 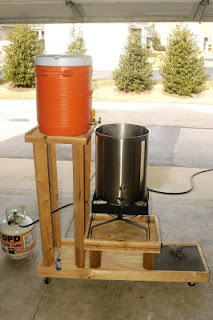 Today's Pale went splendidly. I hit the mash temperature exactly, although I am concerned that I lost about 3 degrees during the 60 minutes and wound up with 151 at the end.
The sparge went well too. Efficiency was good and the gravity was very close to target. I'm trying very hard to duplicate the beer that went to the 2nd round of the NHC in 2008. Most of my beers are good, but that one was truly awesome.

The chill was quick. I brought the wort down below 140 degrees in about 3 minutes.

This beer looked great in the measuring tube when I checked the gravity. I chilled it to 67.5 degrees and pitched a half gallon of trub from yesterday's racking of the IPA and moved it into the bathroom. At this hour it's progressing well and I have high hopes. 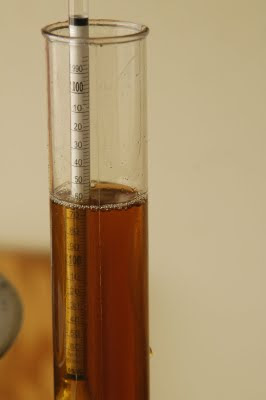