Last week's yeast problem turned out to be not much of a problem at all.  I made a new starter of British Ale II intending to decide at brew time if I should pitch both samples.  I discovered, as I let the new batch of yeast start, that the first batch had begun to take off and that I probably could have used the starter I was complaining about.  Not wanting to over-pitch I threw the first starter away and went with the second sample, which was accelerating normally.

The beer seems to be fermenting well during the four days since I pitched.  But I have noticed an odd sort of bubble in the foam of this batch. 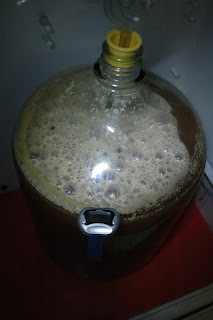 They seem a bit large, as if maybe there is a film of some sort on the surface of the wort.
I experienced the same phenomena with the Blonde Ale I just made a few weeks ago.  The Blonde tastes as it should so I guess I'm fretting too much over what is probably nothing.
However, I do expect cleaner looking Krausen on the beer I make.
Good Beer To You.
Posted by Bluff City Brewer at 4:28 PM