I've been making lots of beer lately.  The IPA I made last week will be ready to be packaged in a few days.

The bottom of the fermenter looks like that about every time.  I think most of what you see there is suspended yeast but there is usually lots of break material that gets through the screen and settles on the bottom.  The the fermentation process generally cuts the thickness of the bottom layer in half and I finish with about 5.5 of the 6 gallon volume you see there. 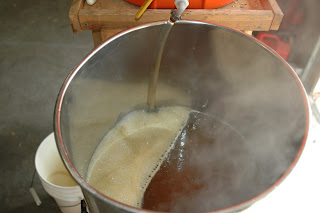 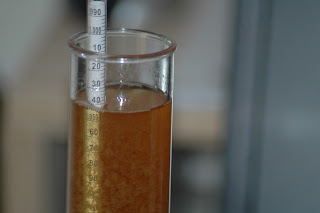 This beer came in at 1.040 or maybe 1.041.  It's hard to tell the level.  I'll err on the conservative side and call it 1.040.
There were a couple of recipe changes as well.  Biscuit malt was replaced by some Victory malt I had to get rid of.  And Munich Dark was put in place of Munich Light for the same reason.  I also added a half pound of C60 to bolster the flavor for such a low gravity beer.
The idea is to make the same great Pale Ale with 33% less alcohol.
This beer, I hope, will come close.  I have made it three times before with moderate success.
It'll never be the same as American Pale 208.   But I'll be able to drink more in the late evening without having an unpleasant morning.
Good Beer To You.
Posted by Bluff City Brewer at 4:46 PM