Okay, so my brewery is really the garage most of the time.  But I did manage to get a shelf up in the BCB board room to hold my volumes of literature associated with the craft. 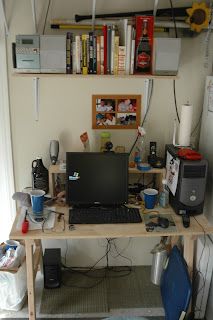 It's not much by carpentry standards but it'll do the job. 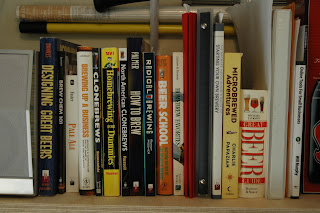 Tonight I took a few beers to the St. Henry Men's Club meeting and received accolades for my efforts.  Most of the men who tried them enjoyed the experience.  It's good to hear comments about my beer from men who really enjoy beer.  Most of the feedback was positive.  But it's the polite, standoff-ish﻿ reviews I'm most interested in.  The "I don't really like dark beer" people are important and I want to make a beer that wins them over too.  A Light Lager or Blonde recipe might bring them into the tent.  Also, I want to be knowledgeable but I don't want to come off like a beer snob.  If we're going to preach the gospel of full flavored, hand made beer, we need to make it a religion that can include everyone who drinks beer.
It looks like a low malt, low alcohol brew is on the horizon.
Cheers.
﻿
Posted by Bluff City Brewer at 11:26 PM