I'm planning several beers for the remainder of the Summer and on through the holiday season so this weekend I stocked up on raw materials.
I want to make a Bock, an Octoberfest, an Altbier, English Pales and, of course my whole line of American Ales.  Blonde, Pale, Amber, Brown, Stout and Steam Beer.  An English IPA and a Porter will likely make an appearance as well. 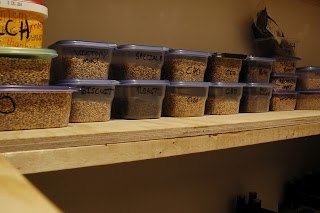 I've got 21 grains and 5 yeasts.  I will need a couple of ounces of hops here and there but that will be a minimal expense.  I already have a couple of pounds of my core hops.  Cascade, Centennial, Columbus, Citra, Northern Brewer, Magnum, Glacier, Amarillo and Hallertauer.  A half pound of Kent Goldings and Saaz will round me out for the cool brewing season. 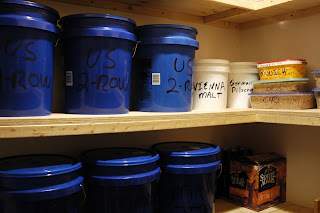 I should be able to make a dozen batches with what I've got here and that will take nearly 6 months.  The savings will be felt in the price per pound of grain.
I'm excited.
The IPA is almost finished and ready to be packaged.  I think I'll keg it up later this week.
The other batch is in bottles on the right in this photo. 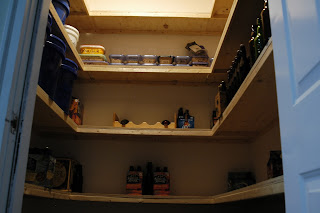 Good Beer To You.
Posted by Bluff City Brewer at 10:06 PM