A fruit beer,... sort of.
My wife and I went to a beer dinner at Bosco's in Memphis with some members of the beer club about 10 years ago.
Great food was served in courses and paired mostly with Bosco's beer.  But the dessert was paired with a Raspberry Porter made by my friend Jody Kane.
Maybe it was the food pairing, the other beers I'd had,...I don't know.  But I remember that beer to this day.
So I'm trying to make one. 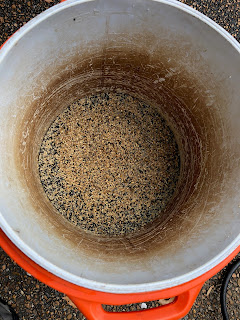 A little chocolate malt, an ounce or two of black malt and some roast barley are the backbone of my attempt.
I'm using a raspberry puree split between the end of the boil and the bottling process to attain the fruit character.
I briefly thought about using real fruit in a secondary fermentation but I'm not all that confident handling it to be certain that no bacteria get in there and ruin the ferm. 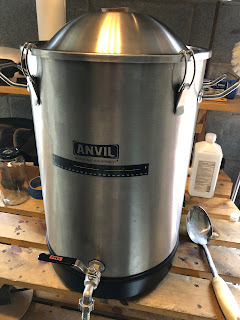 My trusty stainless fermenter and a good pitch of California Ale yeast should do the job well.

Good Beer To You.
Posted by Bluff City Brewer at 12:09 PM