This post will look suspiciously like one from a year ago.
I make Maerzen every October.
Yes, I know its normally made in March and consumed during October but as it gets cool around here I can ferment ales in the house and leave the temperature controlled vault for lagers. 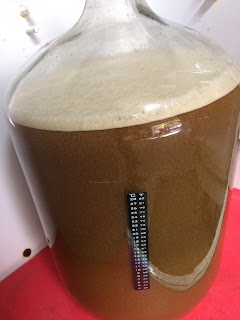 This beer looks good so far.
Expected efficiency.
Good color.
I hope the fermentation is healthy.
With ales I get lots of activity within a few hours.
With Bavarian Lager yeast the krausen starts much slower.
It makes me nervous.  I hate to put so much work into a beer and have it go astray. 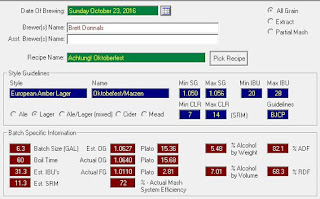 After hearing other brewers talk about the viability of this yeast I might shorten the fermentation by one week.  It will probably be finished in 21 days.
I'll raise the temp to about 70 for a couple of days near the end just to make sure.

This is an old recipe and a good one too.
But I don't want to ignore the possibility that it could be even better. 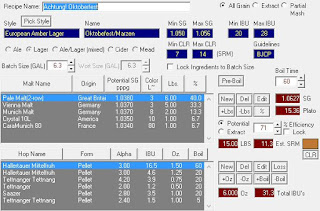 Maybe I'll turn the yeast around and re-brew with new grist and hop schedules in November to see if I can improve this beer.
Good Beer To You.